Dreamforce 2022 has come to an end and what a blast it was! Just like every other year, this annual event did not disappoint with all that it has to offer. In this blog, we will give you a complete roundup of Salesforce Dreamforce’22.

Salesforce Genie was one of the biggest announcements of Dreamforce 2022. The new Customer Data Platform can now be integrated across the Salesforce platform; earlier it was only limited to Marketing Cloud.

There is a stronger integration between personalization and Marketing Cloud Customer Data Platform, owing to Einstein. Lastly, marketers can also benefit from the new connectors through third-data sources such as Microsoft Azure and AWS Redshift to collect data at scale.

Unlike most years, this year there was less swag in the event as the focus was on sustainability. While it was disappointing to some attendees, Salesforce showcased more efforts on the philanthropy side. Salesforce announced a massive grant worth $25 million in support of education nonprofits and school districts across the states. The funding will center primarily on students’ well-being supporting emotional and social learning, and mental and behavioral health programs.

Moreover, a donation of $60 million was made to the marine research center at UC Santa Barbara. The fund will support the efforts of Benioff Ocean Science Laboratory which include Whale Safe. It is a whale monitoring and alert system that aims to reduce whale deaths due to ship collisions. \

Slack Canvas was another big announcement made at Dreamforce 2022. It is the next generation of Quip and allows the organization to curate, manage, and share essential data within the Slack ecosystem. Canvas capabilities go beyond Quip with tighter integration into Salesforce, allowing users to build workflows that harness content within the channels. With more organizations investing in Slack, this integration offers a driving force for companies to completely move away from Microsoft Office altogether.

It enables users to select an AI engine external to the Salesforce ecosystem without extracting data from the platform. The new platform also comes with integration between Salesforce Genie and Amazon Ads, providing more marketing data to platform users.

A Big Step Towards Sustainability

Salesforce launched its Net Zero Marketplace with an aim to easily connect buyers with ecopreneurs in a transparent carbon credit platform to boost climate-positive outcomes. It is also a part of the Salesforce Winter 23 release as the organization looks to integrate Salesforce Net Zero Cloud to aid organizations monitor and reduce their carbon emissions. 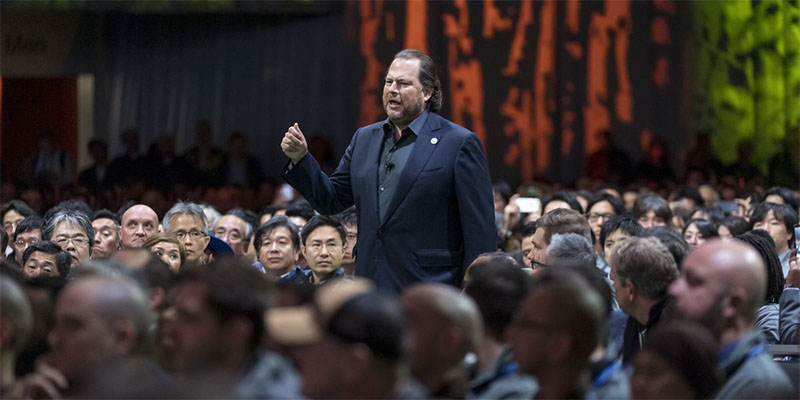 Composable API for SDK and Genie

There was a detailed demo of composable APIs and how they can retrieve data from the Customer Data Platform through a single API call in Apex. Its primary objective is to collect data from various sources and use Lightning Web Components to create custom user experiences.

With this announcement, developers will now be able to test LWC components on a mobile simulator during the development cycle.

Salesforce launched its GraphQL APIs with a vision to offer flexibility for developers such as:

The advantage for developers is that they can control what data they want and don’t want from the server. This makes the API request-response mechanism more effective in comparison to REST APIs.

There was a lot of focus on no-code and low-code formats this year at Dreamforce. Attendees witnessed the potential to integrate screen flows in Lightning Web Components.

Until now, developers had to depend on writing custom code or using open-source solutions to parse CSV files. This new ability of natively Apex will make things simpler for developers by making their codes more efficient.

The newly launched code builder was a major buzz creator during Dreamforce. It is a fully-functional IDE for development that runs on a browser.

Salesforce Dreamforce 2022 with its array of announcements has got everyone in the industry excited. It is creating a robust technology stack to fuel growth and competes with other conglomerates.