For those who missed Dreamforce’16, here’s a quick summary of the Developer Keynote Session which was one of the most talked about sessions in DF16.
The opening session of the keynote was done by Srinivas Tallapragada, President of Technology, Salesforce. The session focused on 3 points:

He spoke about how to build an app with minimal code leveraging the amazing features of the Lightning Design System and App Builder. He also explained how it can be made smarter with the newly introduced Salesforce Einstein.
After that,  Leah McGowen-Hare, Director of Employee Content Strategy, Technology and Products at Salesforce demonstrated the new Lightning features in Winter ’17 like the Lightning Data Service and Lightning Base Components that lets you  build apps faster.

With some of the new features from Winter’17, the app building process is much easier with minimalistic code. Lightning combines user experience, framework and a wide amount of applications and elements for faster app building. The Lightning Base Components handles all html and css which allows developers to develop apps quickly. Also, the components can be launched through a simple action by placing on the utility bar.

You can now build smarter apps with the all-new Salesforce Einstein. With Einstein you can :

The highlight of the keynote was the introduction of Developer UX, which will now make the development process easier for all developers. The new developer experience features key points like: 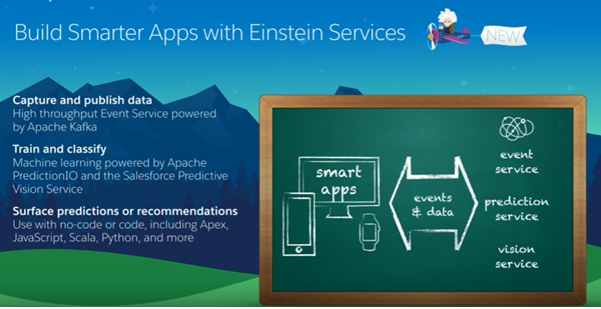